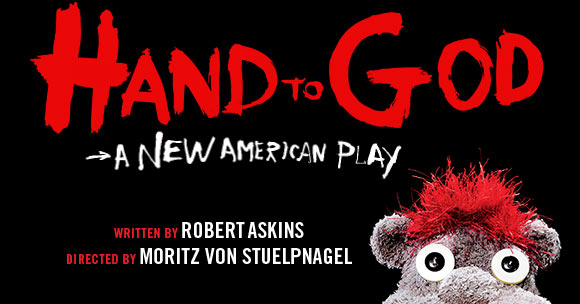 Hand to God centers on shy student Jason, who finds an outlet for his creativity at the Christian Puppet Ministry in the religious small town of Cypress, Texas. Jason’s complicated relationships with the people around him are thrown into further upheaval when Jason’s hand puppet, Tyrone, takes on a shocking and dangerously irreverent personality all its own.
Hand to God explores the startlingly fragile nature of faith, morality and the ties that bind us.
In "Hand to God" Ekhougen has been the designer and creator of the 4 puppet characters and their different incarnations since 2011.

Hand to God opened on Broadway at the Booth Theatre on April 7, 2015.
The Broadway production received five Tony Award nominations, including for Best New Play.

Off-off Broadway at the Ensemble Studio Theatre in October 2011, and returned in February 2012.

Off-Broadway at the Lucille Lortel Theatre on March 10, 2014. Produced by MCC 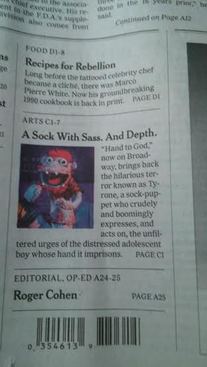 That Evil Sock Puppet is Just So Cute!
By MARK BLANKENSHIP/ TDF Fri Mar 27, 2015  •
Evil Tyrone's as evil as you feel he is. Inside the puppetry design of Broadway's Hand to God
Even when he's possessed by Satan, Tyrone the sock puppet is still pretty cute. And that's no accident. Just ask Marte Johanne Ekhougen, the puppetry designer for Hand to God.
In Robert Askins's giddily dark comedy, now on Broadway at the Booth Theatre, we meet Jason, a shy teenager who created Tyrone for the puppetry club at his Texas church. All seems well – if a little dorky – until the devil seizes Tyrone's cloth body, unleashing havoc on Jason and his friends.
There's a sick joy in watching a googly-eyed piece of fabric do terrible things, and the play get even more unhinged after Jason throws Tyrone out of a moving car. Undeterred, the puppet quickly returns, only this time, he's got frizzier hair and big buck teeth. It's a sign that he's gone to the dark side.
Still… he hardly resembles the Prince of Darkness. "We tried making him look evil, with more evil eyes, and it was just wrong," Ekhougen says. "I had been looking at a lot of pictures of demons, but we never actually want him to be seen as evil. He's just a more extreme version of Good Tyrone. Good Tyrone is the nice, clean church version, and Evil Tyrone is the unshaven, sleep-on-the-sofa-for-two-weeks version."
That speaks to the heart of the play, which questions where wickedness really comes from. As Ekhougen says, "Evil Tyrone's as evil as you feel he is. You put the evil in him yourself."
She continues, "Everything that Tyrone does for Jason might seem evil, but it ends up being good. It releases potential in [Jason] and takes the character further. Maybe we all kind of need an Evil Tyrone to get us further. It's important for everyone to have an alter-ego, because maybe you let yourself go and then you get somewhere."
Of course, Ekhougen isn't only concerned about how vicious Tyrone looks. She also has to make sure he suits Steven Boyer, who has played Jason in every production of Hand to God. (The play premiered at Ensemble Studio Theatre in 2011, then moved to MCC Theater last season.)
Boyer controls everything about Tyrone, speaking his lines in a puppet voice and flailing his arms with metal rods. Unsurprisingly, he has specific ideas about his co-star's appearance.
"I feel like I'm making Steven's favorite shoe," Ekhougen says, noting that everything from eye placement to the size of the metal rods is a factor. "It's his instrument."
Understudies get their own puppets too, partially because they become shaped to a performer's hand and partially because everyone has their own preferences for those tiny details. Add in all the back-up puppets required in case of emergency, and Ekhougen is basically filling a Broadway theatre with demon toys.
"There are a lot of Tyrones going around the building," she says, somewhat ominously. "It's like he's everywhere." 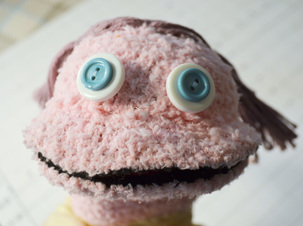 Hi. My name is Rita, and I love Jesus. Do you love Jesus? 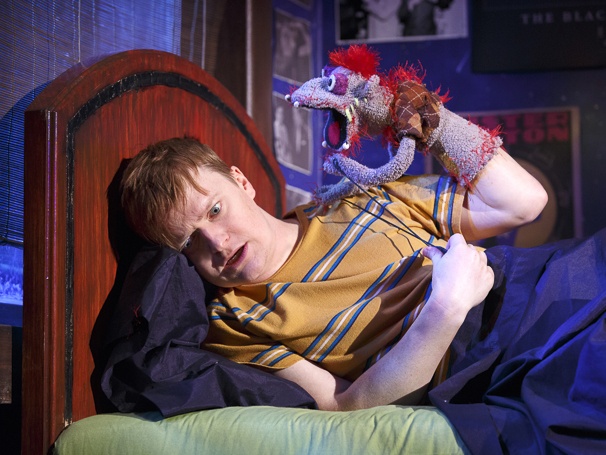 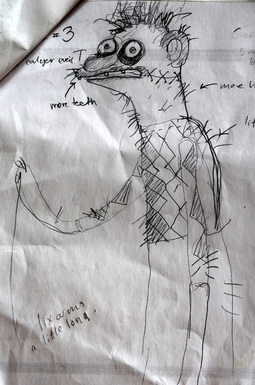 A very early sketch of Evil Tyrone (2012)
Powered by